Which Gaming Genre is Gaining the Most Popularity in 2021?

From puzzles, action RPG, and sports games, the gaming world is exploding with new genres emerging every day. But which one gained the most popularity in 2021? Trends and favoured genres are constantly fluctuating so let’s see which one won the gaming popularity battle over the last year.

With around 36% of the Irish adult population engaging in online gaming, it’s fair to say gaming is a competitive industry. Interested in the genre that is doing the best job of staying relevant, we sought to find out which one has experienced the highest increase in popularity online. Having identified the most popular gaming genres of 2020, we analysed the peak Twitch viewership for each one.

From this, we were then able to calculate the difference in viewership from 2020 to 2021 to rank them in order of popularity within the gaming world*.

Percentage-wise, it’s an astounding increase of 813% which places it right at the top of our rankings of gaming genres gaining the most popularity in 2021.

Looking to watch others conquer strategy games in 2021, there were 63,215 more worldwide viewers for this genre in 2021 than the year before with viewers becoming more interested in games such as Warhammer and Endless Legend.

This means the real-time strategy genre sits at number two on our list, with a 481% increase in popularity in 2021 compared to 2020.

Puzzle games take fourth place and have an incredibly high percentage increase when it comes to Twitch stream viewership.

Brain teasers like Tetris are well-known games, and most people have had a go at a puzzle game during their lifetime. They’re an easy form of entertainment which is why it’s not surprising that the popularity took a giant leap from 2020 to 2021, with 298,467 more Twitch viewers and a percentage increase of 339%!

Although they’re no longer as talked about as they were in their heyday, these platformer and runner games have clearly been keeping gamers occupied whilst stuck indoors.

The mysterious casual genre is home to games that target a mass market rather than niche audiences. They often include rules that are easy to understand, shorter playtimes, and goals are quickly achieved. The likes of Fall Guys and Among Us fall into this category, for example.

The perfect way to take a break from your everyday life is a life and immersive game where you can escape and become any character you want. One of the most famous examples of this genre is Dungeons & Dragons (or D&D for short), which has built up a worldwide following and been used as the basis for countless role-playing video games.

It seems there are still a fair few people who have only just discovered this gaming genre, as there were an extra 140,803 online viewers in 2021 than the year before – an increase of 269%.

While the gameplay of third-person shooter games primarily consists of shooting, it can also blend complex storylines, side quests, and resolutions to make an exciting game to play.

As people had more time on their hands to fully immerse themselves in the gameplay, it’s no wonder this genre increased in popularity by 237% and had a peak of 897,489 more viewers in 2021, compared to 2020.

The team sports genre has had the ninth-highest increase in online popularity over the year, with 41,499 more peak viewers in April 2021 than in 2020. Although the number of average viewers was very high in 2020 at 21,198, there is a clear increase in popularity for team sports-based games.

With a year that forbade many types of sports, it’s no wonder more people were interested in watching it being played online through virtual means. 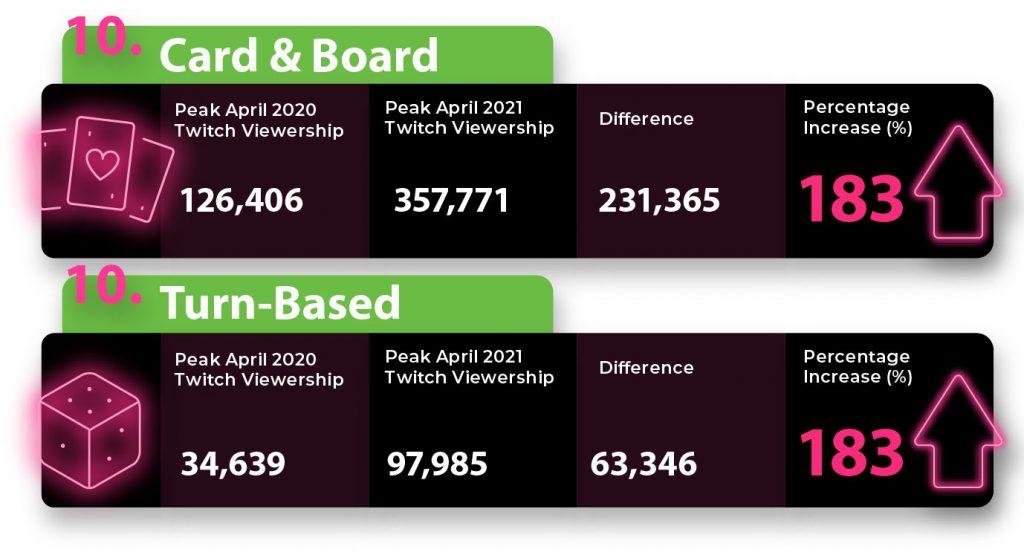 Eager for a dose of healthy competition, there was an increase of 231,365 peak viewers for the card & board genre in 2021 than the year before, and 63,346 for turn-based games. With turn-based tactics, simple card games and games against a computer, there are plenty of streams to choose from.

This means these two genres sit in joint tenth place on our list, with a 183% increase in online viewership when compared to 2020. 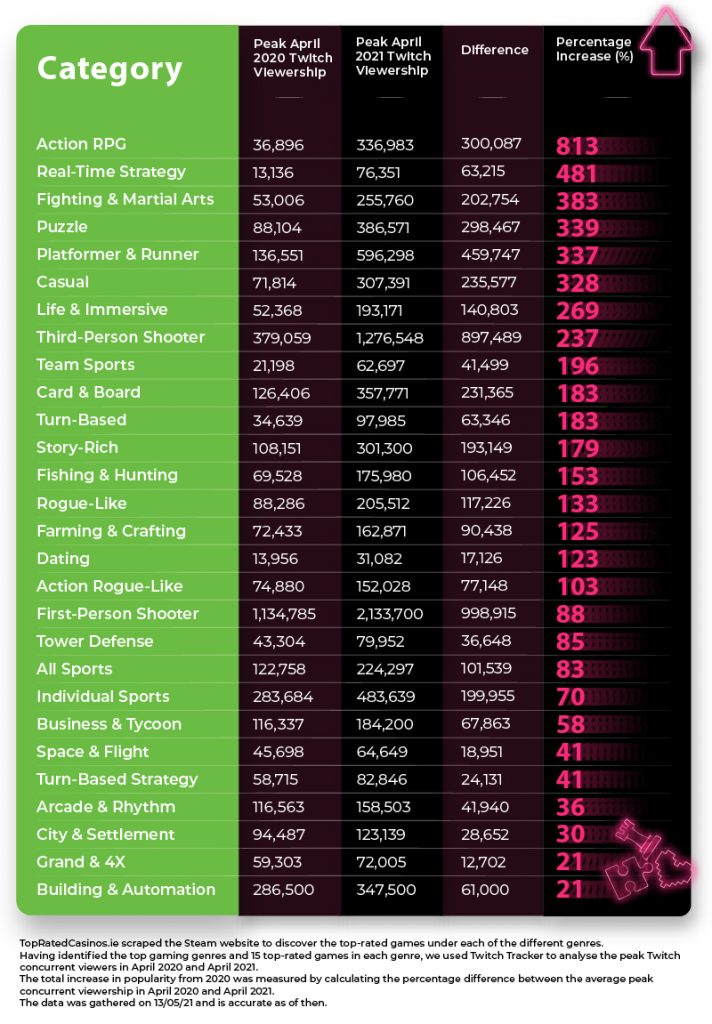