Dive deep and explore a rich underwater world with Microgaming’s classic slot Mermaid’s Millions. It’s been delighting players since its release in 2008 and though it’s one of the provider’s oldest slots, it remains popular to this day. It has bright, colourful cartoon-style graphics and some pretty interesting bonus features that are worth trying to trigger! 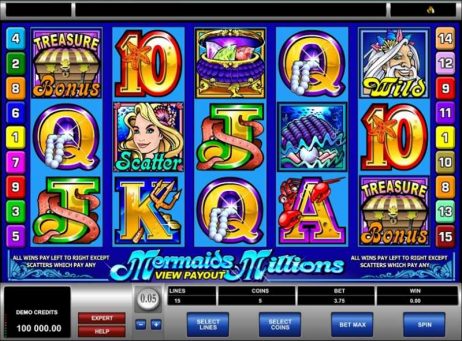 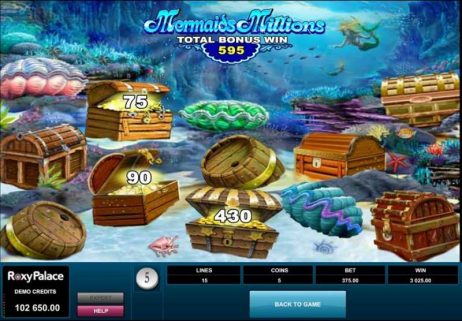 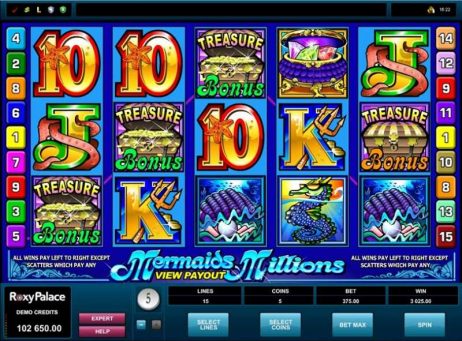 The king of the seas himself, an old man with long white hair and a crown made from shells, is the slot’s wild symbol. This symbol substitutes for all other symbols except for the mermaid scatter and the treasure chest bonus symbol.

You’ll notice mermaids giggling when you find a scatter symbol. 3 or more of these mermaids will give you 10 free spins and a 3x multiplier to match.

The bonus round is a straightforward ‘pick and choose’ game that is activated when 3 or more treasure chest symbols are on an active payline. The different symbols revealed from the chests offer different winning amounts.

Land three to five mermaid scatter symbols anywhere on the reels and you’ll be rewarded with 10 free spins, along with a scatter wins payout. While free spins are in play, all wins are trebled. This feature can be retriggered: to do so, you simply need to land at least three scatters on the reels again.

To trigger the Treasure Bonus feature, you need to land at least three Treasure Bonus symbols on an active payline, i.e. a payline you’re betting on. This is a pick-me game where you have various different chests to choose, each one of which has a cash prize behind it. The more symbols you landed to trigger the feature, the higher the cash prizes are.

Paylines
Mermaid’s Millions is played on a standard reel set with three rows and five reels. It has 15 paylines altogether and they’re not fixed, so you’re free to choose exactly how many paylines to bet on. All paylines pay from left to right only.

Paylines
Mermaid’s Millions is played on a standard reel set with three rows and five reels. It has 15 paylines altogether and they’re not fixed, so you’re free to choose exactly how many paylines to bet on. All paylines pay from left to right only.

Our verdict
Mermaid’s Millions is a classic slot that’s done a good job at standing the test of time. Though it’s not as modern or visually rich as some more recent slots, it’s still great fun to play thanks to its exciting features, including its free spins round and treasure bonus feature. Have a spin of this and go on a thrilling aquatic adventure with the joyful mermaid – hopefully you’ll land plenty of wilds, which are the slot’s highest paying symbol. 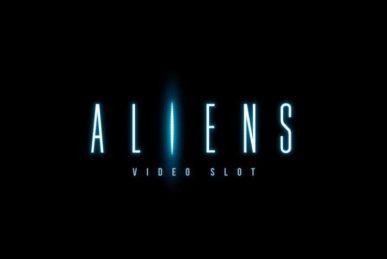 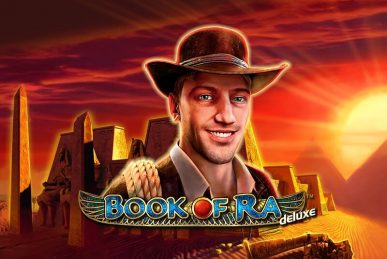 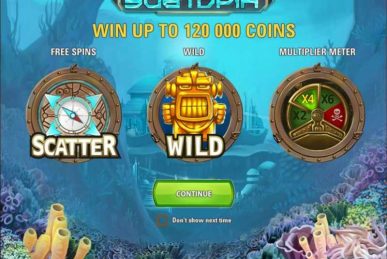