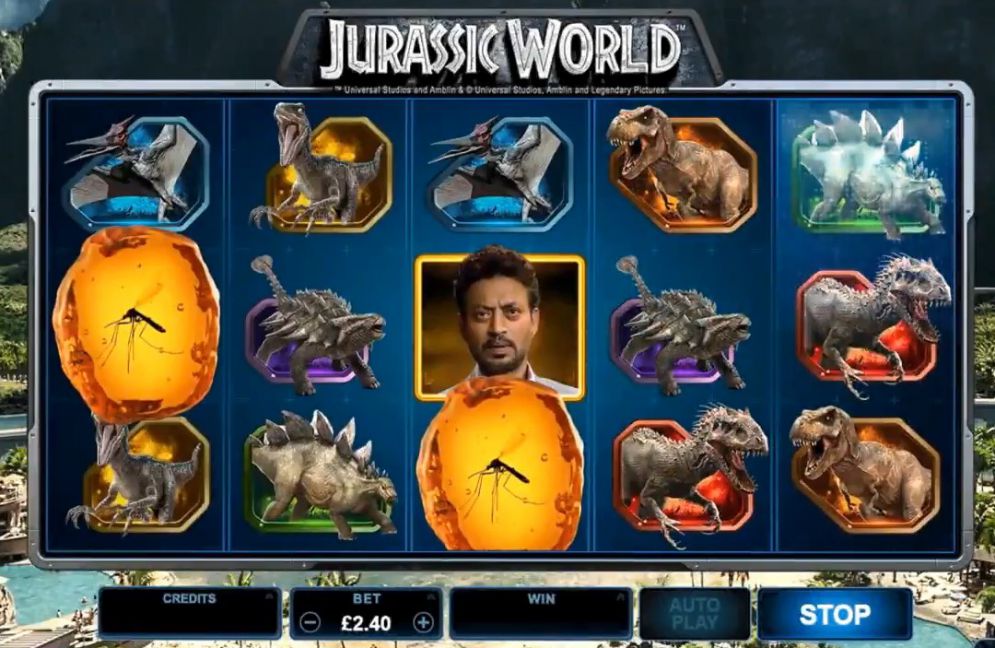 Jurassic World is a slot based on the blockbuster movie of the same name. Universal has teamed up with Microgaming to create an incredible slot that will not disappoint fans of the film series. In this game, you’ll see clips and characters from the film on the reels, and have the potential to trigger a wide range of bonus features, including wilds, a scatter feature, and a randomly triggered Indominus feature. There’s also a free spins round with three different modes to play, each awarding modifiers like multipliers and rolling reels.

Players will find themselves at the famous Jurassic World Park with 12 symbols on the reels, including Owen Brady, Claire Dearing, Velociraptors, and T-Rex.

Are you ready to go on a prehistoric adventure with Jurassic World? If you’re looking for a medium variance slot game with high-quality graphics and a wide range of exciting bonus features, then this may be the slot for you. Read on to learn more about this slot and the best online slot sites it’s available at.

This slot has a below-average RTP of 95.45%. This is a medium variance title, meaning payouts are fairly frequent and may regularly be medium-sized.

In the base game, the mosquito is the highest value symbol on the reels and awards 100x your stake when five land in a winning combination.

Jurassic World was developed by one of the most reputable software providers in the world, Microgaming. This software provider holds licences from the UK Gambling Commission and Malta Gaming Authority. Microgaming is a founding member of eCogra, the organisation that tests games across the entire gambling industry to ensure they are random and fair.

Jurassic World has four bonus features – a wild symbol, a scatter feature, a free spins round, and the Indominus Rex feature.

The game logo is the wild symbol substitutes for other symbols except the scatter to help form winning combinations.

When players are first playing Jurassic World, the free spins mode is awarded to them randomly. After the 15th trigger of the free spins round, players can pick the free spin mode they want to play in.

Jurassic World is available to play anytime, anywhere from mobile and tablet devices. This is a modern and functional slot game that will adapt to smaller screen sizes. So, no matter whether you are playing on a mobile, tablet, laptop, or desktop PC, the same high-quality graphics can be enjoyed on all devices.

How Does it Compare to Other Microgaming Titles?

Jurassic World is a hugely popular slot from Microgaming and so too is the original title in this series, Jurassic Park.

Jurassic Park has the same payline structure, but the graphics are much darker and more sinister. You’ll find all your favourite characters from the original film alongside dinosaurs on these reels. This game doesn’t disappoint on bonus features as players will find the randomly triggered T-Rex feature – adding wilds to the reels – and a free spins feature that has five different rounds.

While Jurassic World has fewer modes in the free spins round, it does offer much larger maximum wins of up to 14,166x your bet, compared to Jurassic Park’s 6,333x.

How Does it Compare to Other Slots on the Market?

Jurassic World is one of the best official movie-themed slot games on the market. Another great slot is Planet of the Apes from NetEnt. This game has dual reels, wilds, the rise bonus, the dawn bonus, stacked wilds, and two different free spins modes.

Both games offer high-quality graphics and great bonus features, so players are spoilt for choice.

The Jurassic World slot is the official game for the movie, so you can expect lots of references in the design. Behind the reels, fans of the film will spot the stadium where the fearsome Mosasaur dinosaur lives underwater. Players will also appreciate the different backdrops, changing depending on what free spins mode you are playing in. The low-value symbols are the various dinosaurs including the T-Rex, Velociraptor, and Stegosaurus. The high-value symbols are characters from the film including Owen Brady and Claire Dearing. The famous Jurassic Park theme plays in the background as you spin.

Similar Games to Try Out

Jumanji – Jumanji is a NetEnt slot game with five reels and 35 paylines, based on the iconic film. Players will be transported to the famous board game from the movie in a slot that’s jam-packed with bonus features. Four randomly triggered features, four board game features, and a mystery feature can all be discovered. Players can look forward to wilds, free spins, multipliers, and more as well as a maximum win of 504x your stake.

Lord of the Rings – Lord of the Rings is a Microgaming slot and the official game of the blockbuster movie. This is a five-reel, three-row, 243 ways to win slot with four progressive jackpots referred to as bronze, silver, gold, and mithril. On the reels, you’ll spot all your favourite characters from the film including Gandalf and Frodo. Bonus features include scatters, a free spins round with wild reels and multiplier, and a Gollum bonus feature that awards random cash prizes.

Terminator 2 – Terminator 2 is a five-reel, three-row, 243 ways to win game from Microgaming based on the hit movie starring Arnold Schwarzenegger. On the reels, you’ll find characters from the film including the Terminator and Sarah Connor. This game offers wilds, a randomly triggered T-800 vision feature that awards cash bonuses, and a free spins round.

Jurassic World is one of the highest grossing films of all time, and those who love the Jurassic Park series will thoroughly enjoy spinning the reels of the official slot from Microgaming. The graphics are of the highest quality and it’s great to see clips from the film in the game. The bonus features are just as impressive as the graphics and, while the randomly triggered Indominus feature and scatter feature are great, the real highlight is the free spins round. The feature has three modes and a range of extra features. With maximum wins of up to 14,166x up for grabs, this is a terrific slot game, even if you aren’t a fan of the movies.

Play Jurassic World at One of These Top Casinos

Slotnite – Sign up to Slotnite and make your first deposit to receive a 100% bonus up to €250 plus 100 spins. At this modern casino, players can choose from over 1,200 games including slots, casino, and live dealer games. Players can enjoy 24/7 customer support should they run into any difficulties whilst playing here.

888 Casino – Sign up and make your first deposit at 888 Casino to get a 100% bonus up to €200 and an extra €88 free. This casino offers over 1,000 casino games, available to play from mobile devices by downloading the iOS or Android mobile app. As one of the most reputable brands in online gambling, the vast majority of players will enjoy playing at this site.

LeoVegas – Make a first deposit at LeoVegas to receive up to €1000 in bonus cash plus 200 free spins. This is one of the most popular brands in online gambling and players can access an array of top software providers including IGT and Microgaming. Enjoy playing hundreds of casino and live dealer titles by making a deposit via a reputable payment method such as PayPal or Paysafecard.